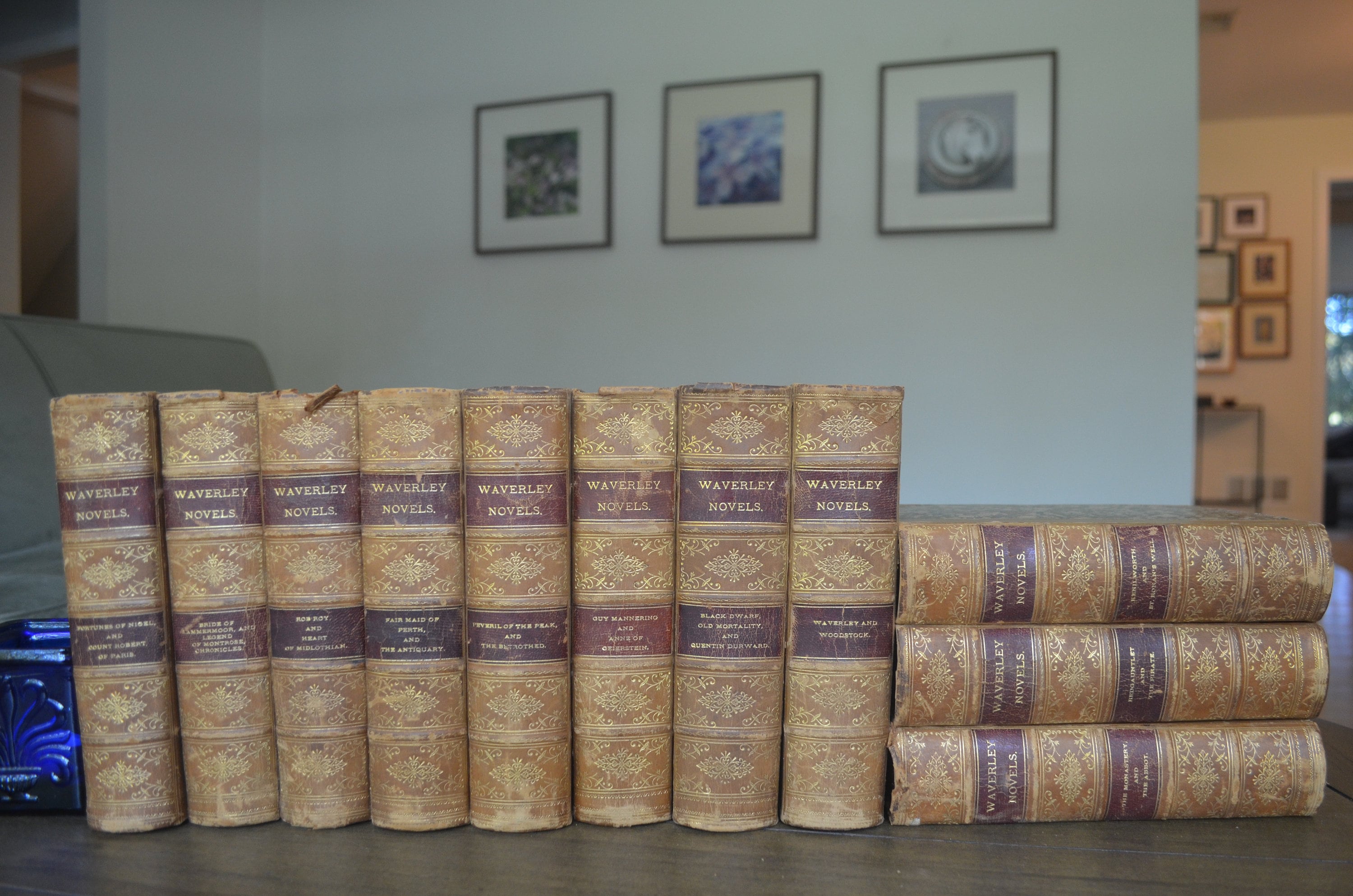 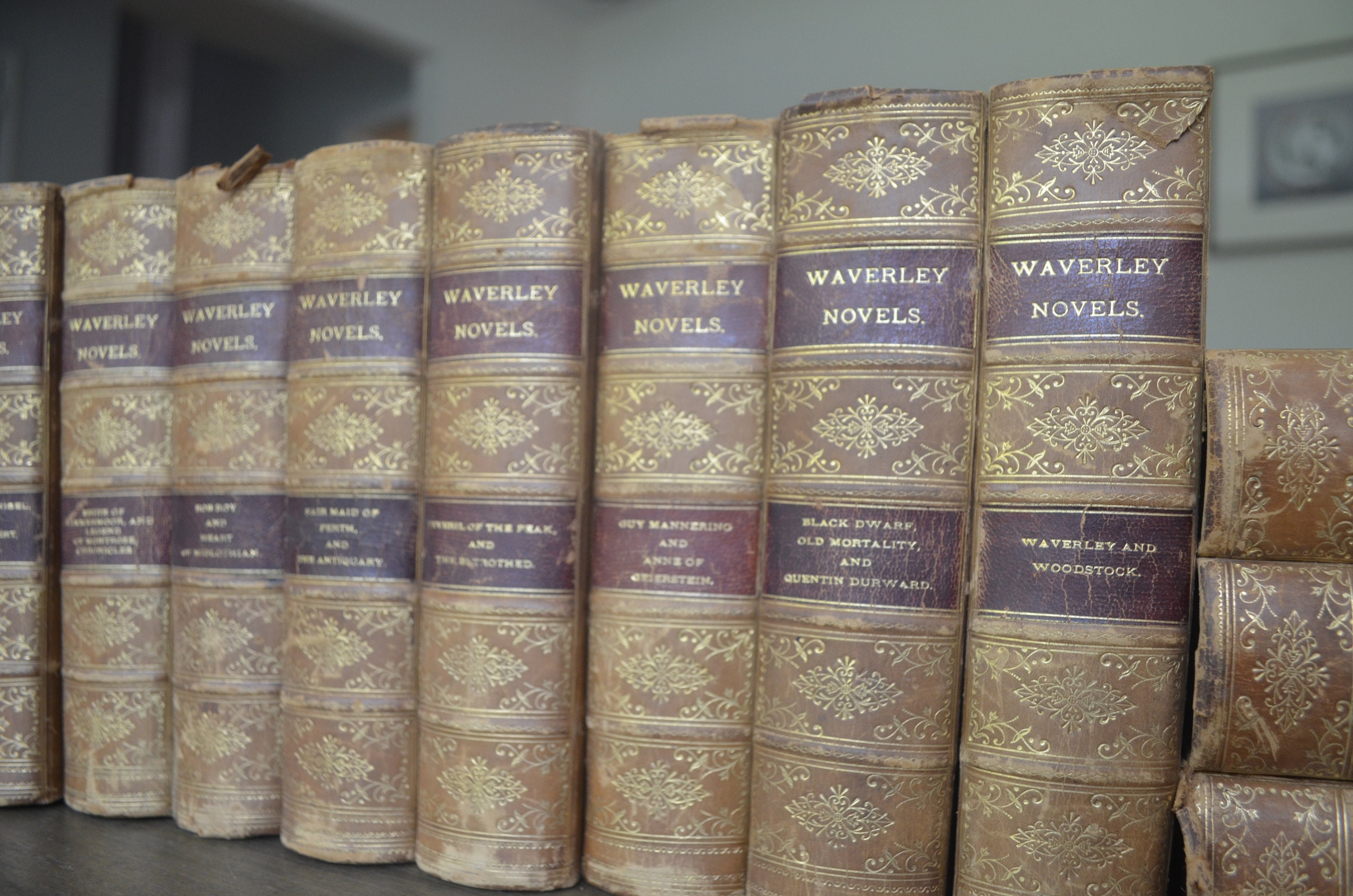 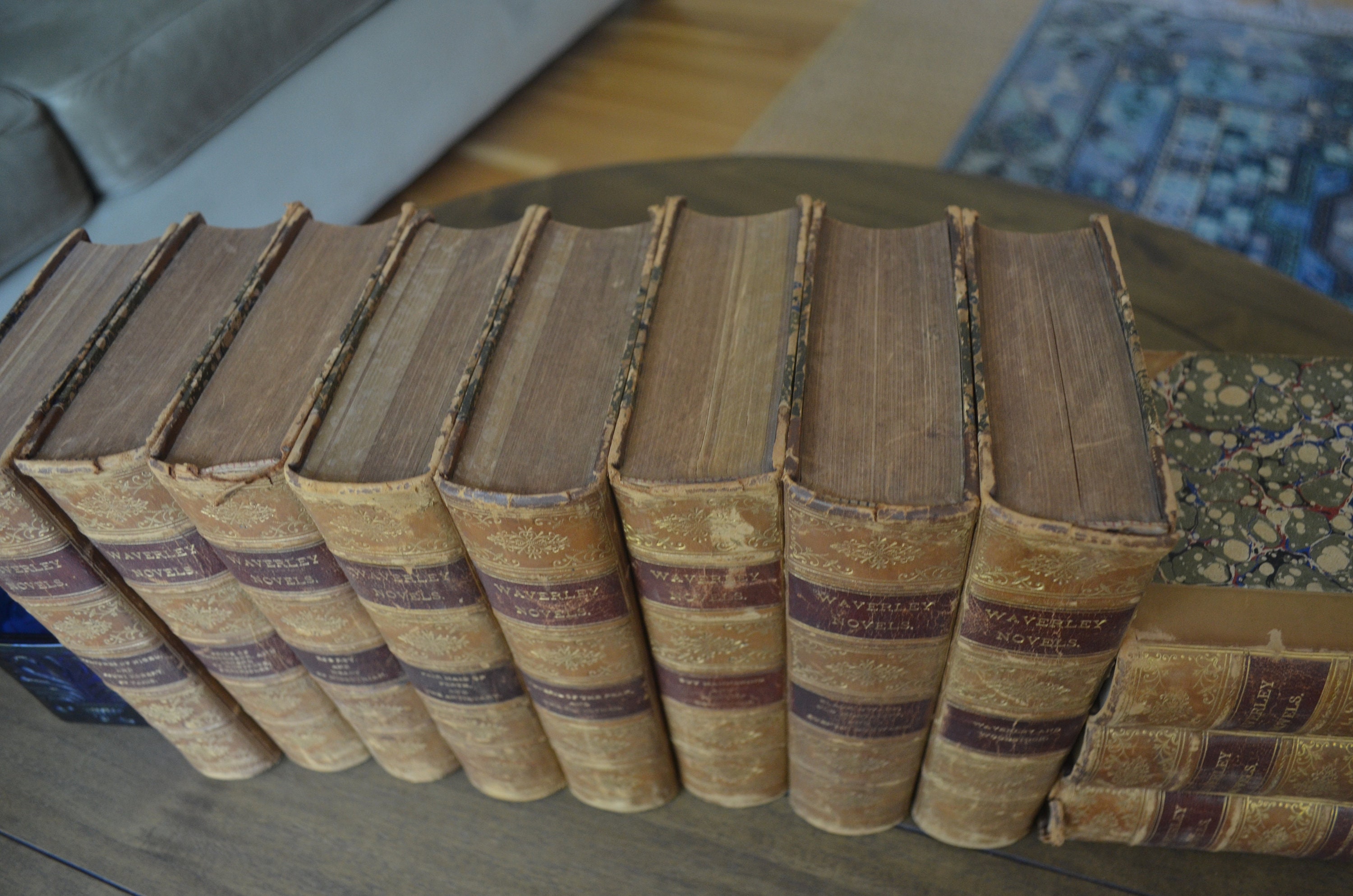 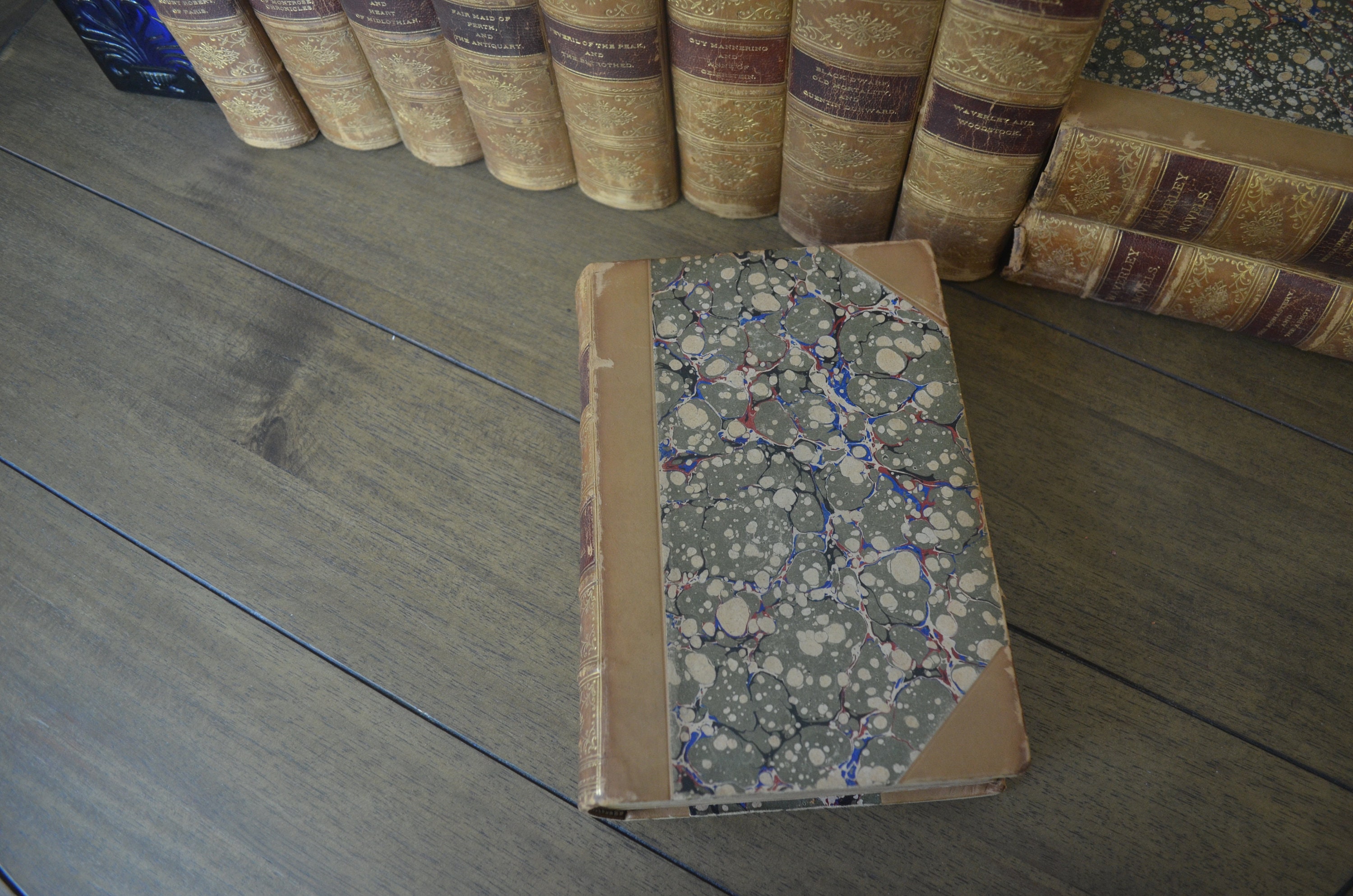 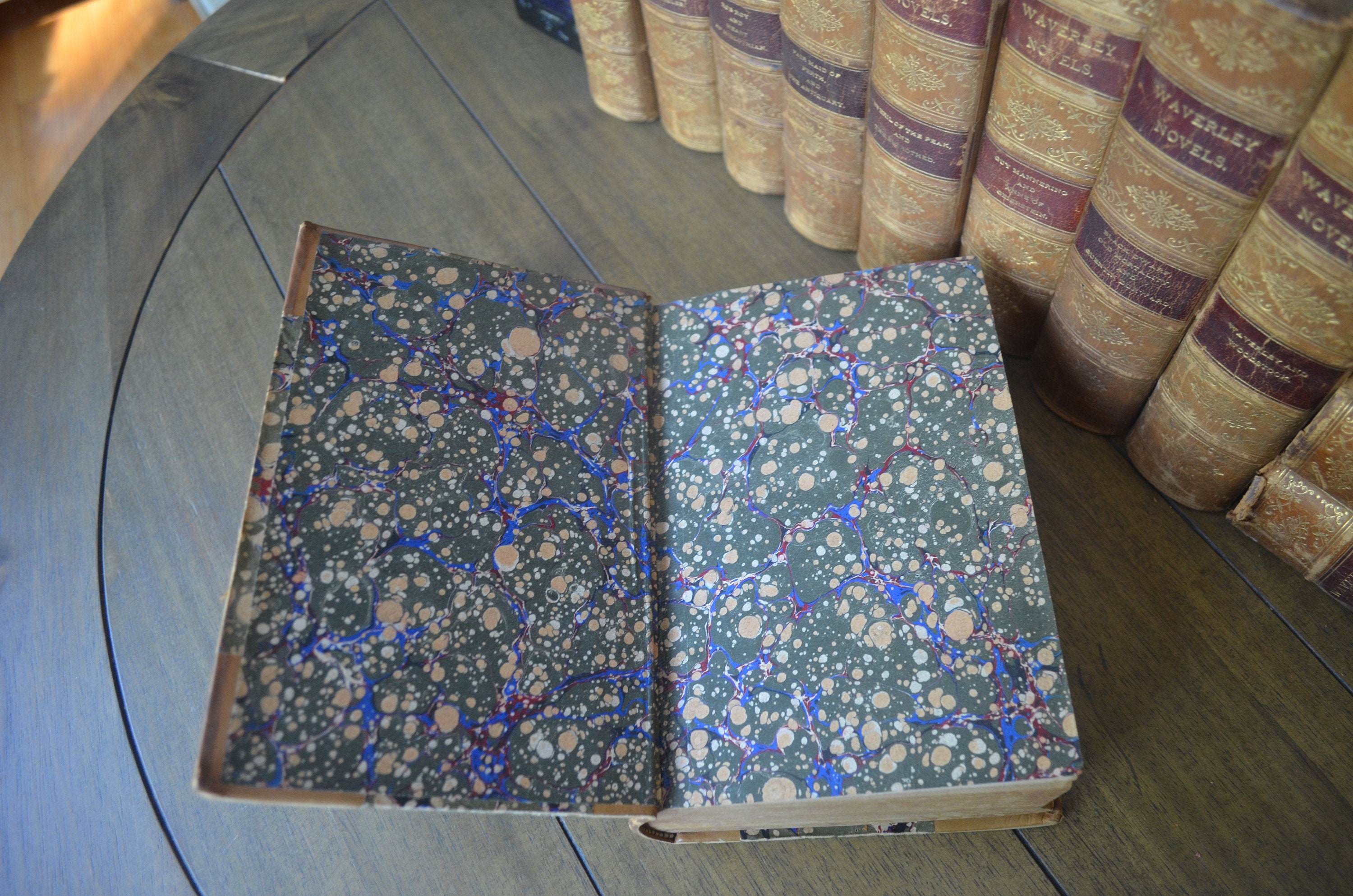 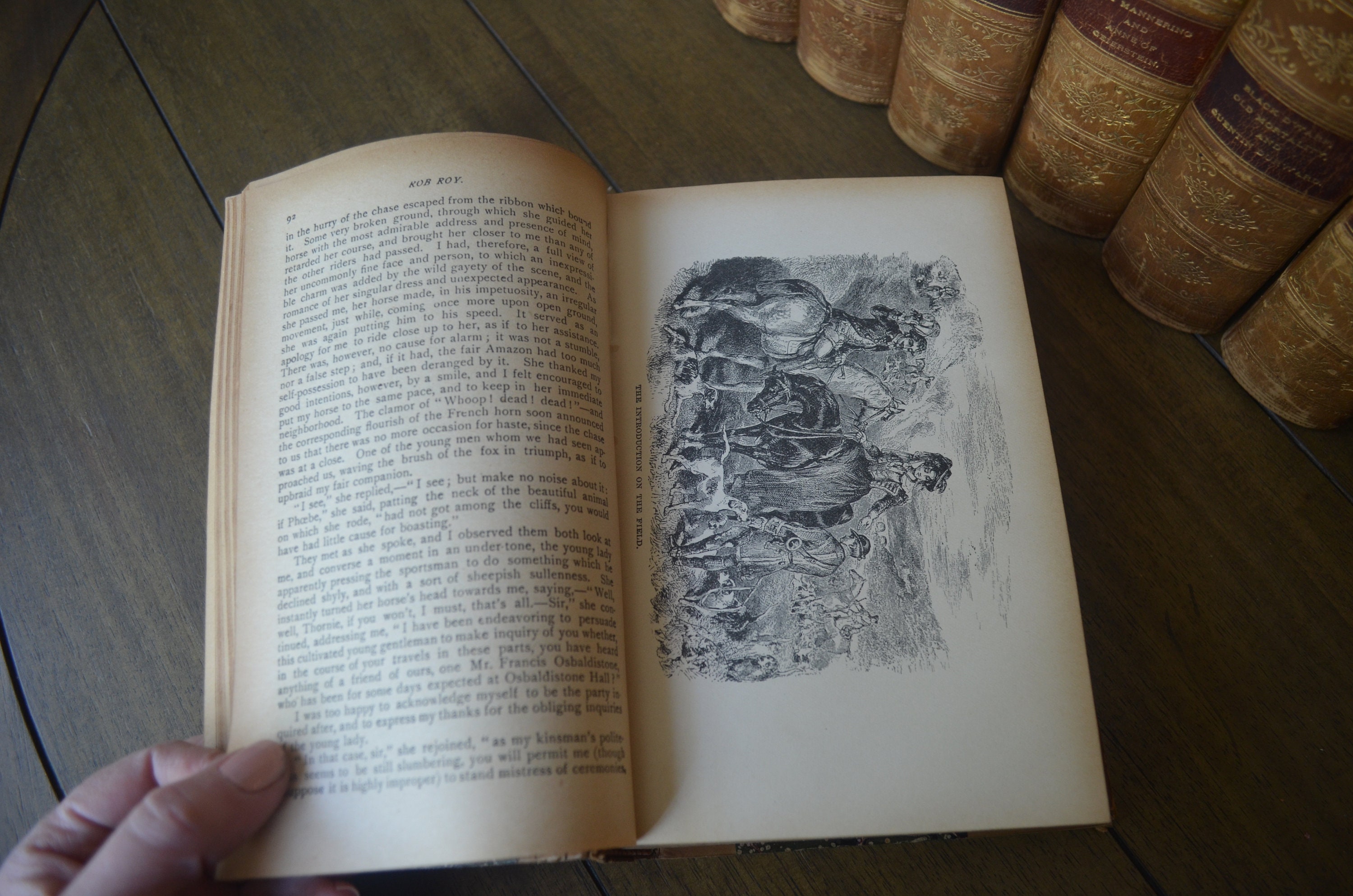 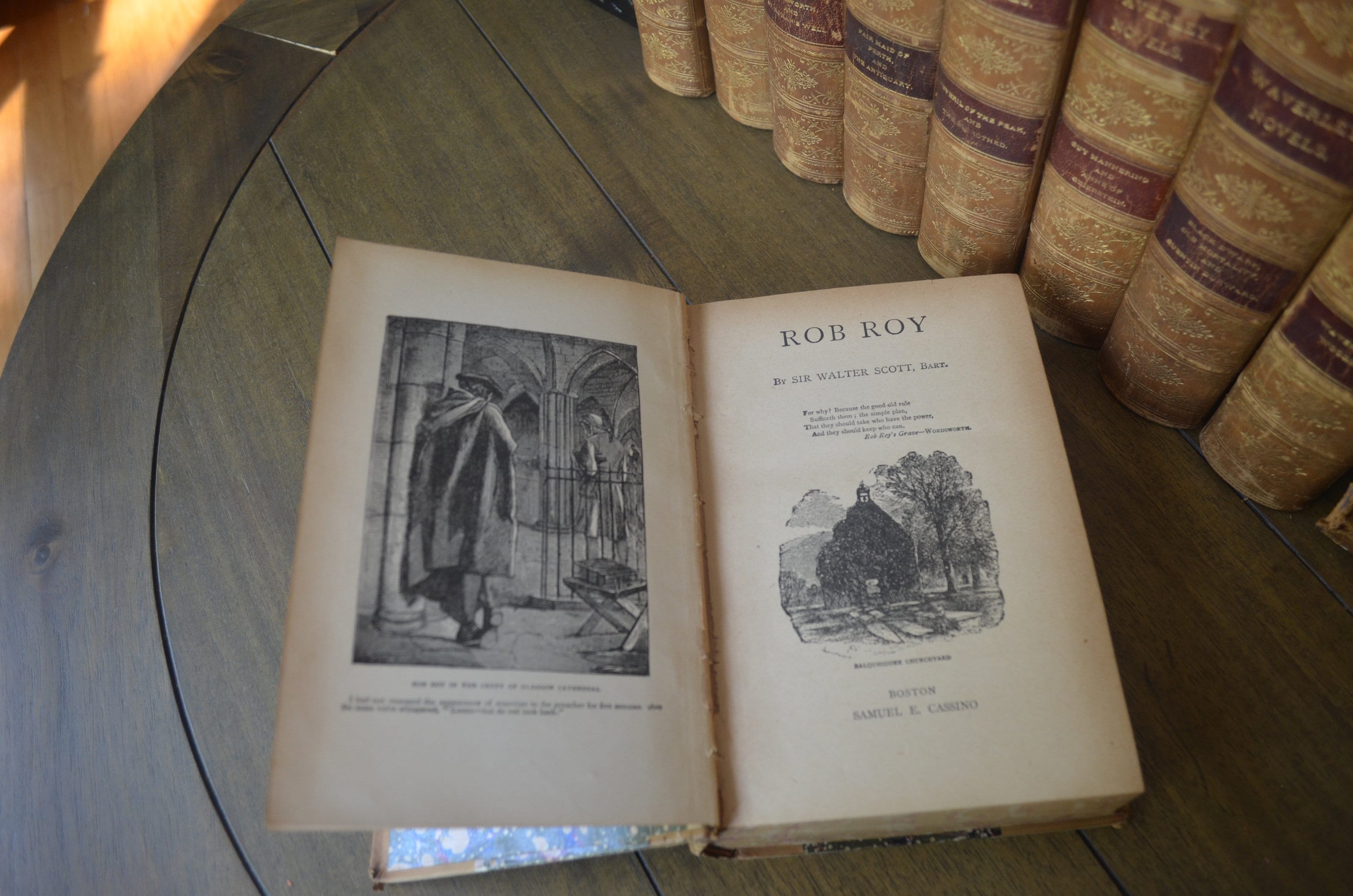 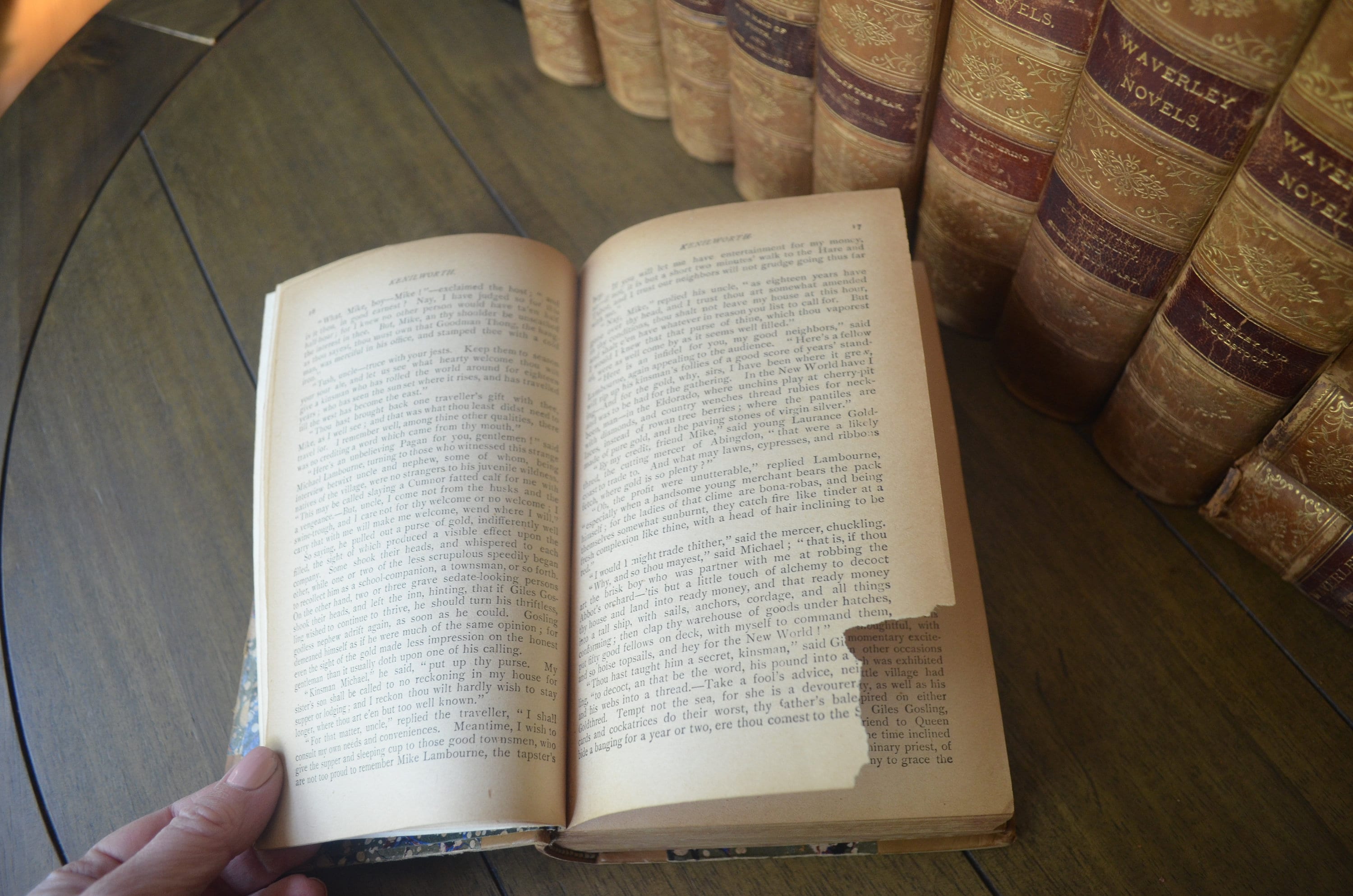 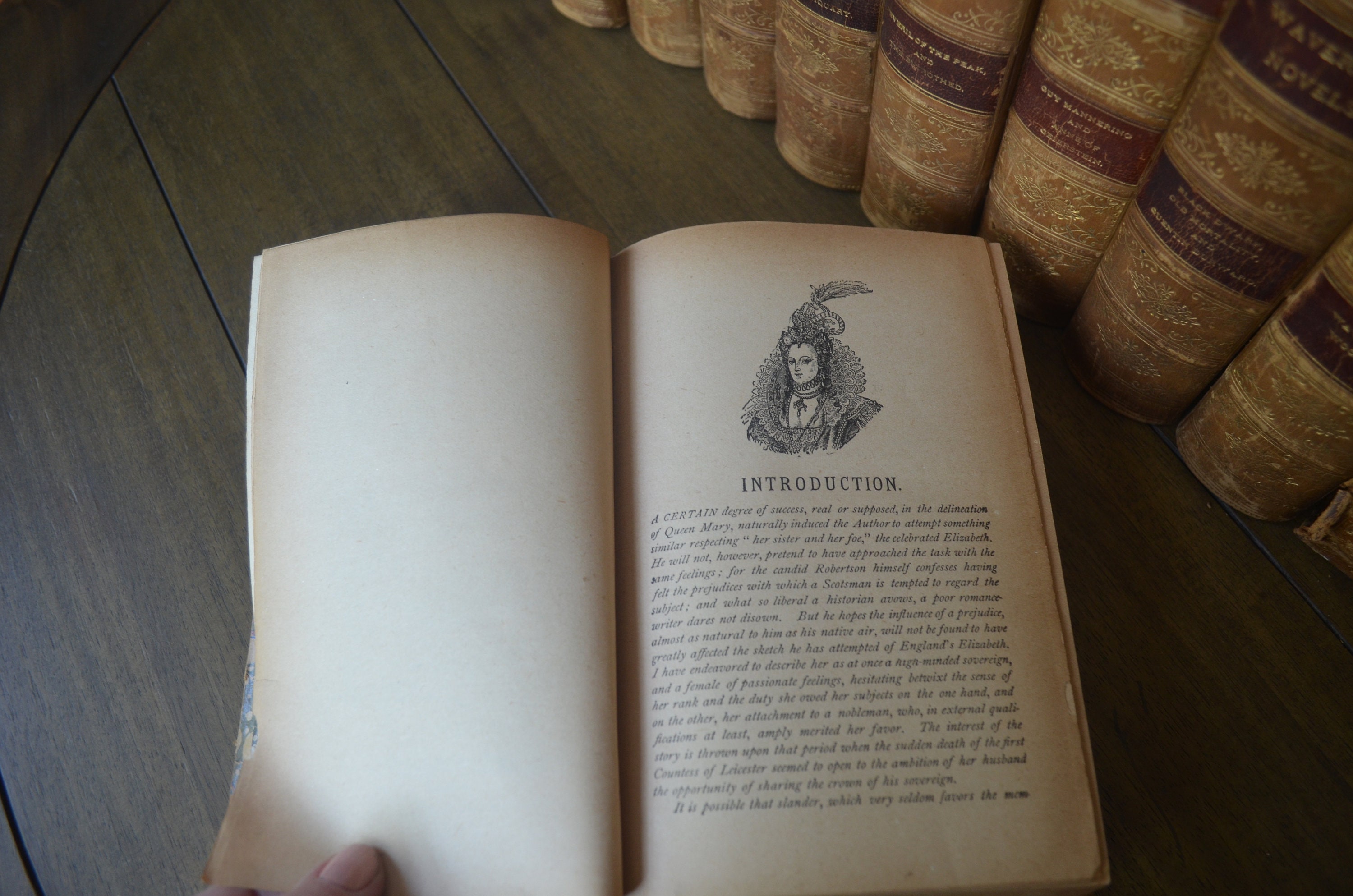 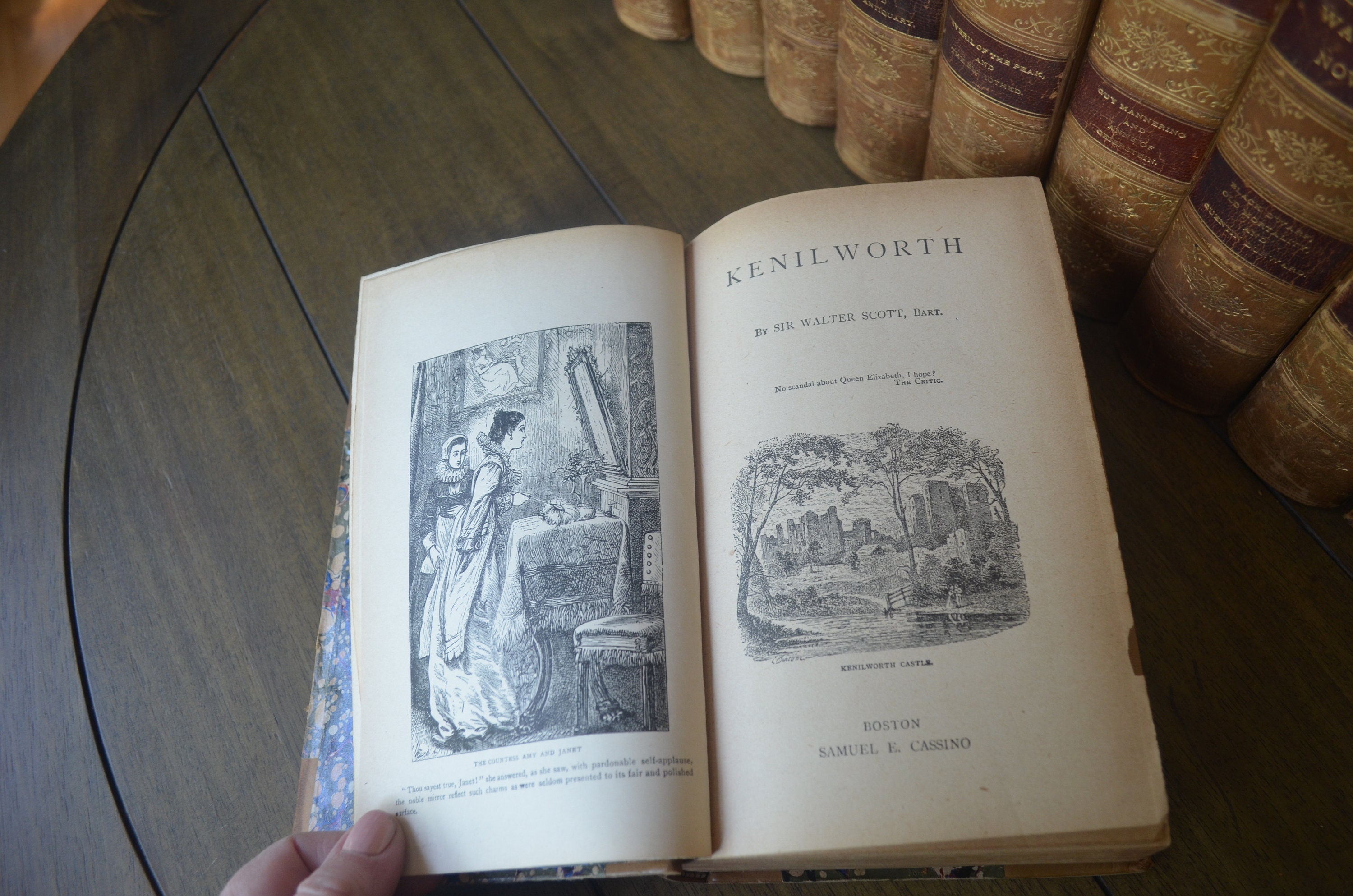 Kenilworth and St. Ronan's Well
The Bride of Lammermoor and A Legend of Montrose
The Black Dwarf, Old Mortality, and Quentin Durward
Rob Roy, and Heart of Midlothian
Redgauntlet and the Pirate
The Monastery and The Abbot
Fortunes of Nigel and Count Robert of Paris
Guy Mannering and Anne of Geierstein
Peveril of the Peak and The Betrothed
Fair Maid of Perth and The Antiquary
Waverley and Woodstock

Hundreds of lovely illustrations. Leather spine and marbleized front cover and end pages. I believe that this is a complete set.

Leather bound, bumps, but all covers are attached. Owner's signature. Some chipping of inside pages. Clean and tight. See pictures for more evidence of condition. More pictures available upon request.

***
The Waverley Novels are a long series of novels by Sir Walter Scott (1771–1832). For nearly a century, they were among the most popular and widely read novels in Europe.

Because Scott did not publicly acknowledge authorship until 1827, the series takes its name from Waverley, the first novel of the series released in 1814. The later books bore the words "by the author of Waverley" on their title pages.

Sir Walter Scott, 1st Baronet FRSE FSA Scot (15 August 1771 – 21 September 1832) was a Scottish historical novelist, poet, playwright, and historian. Many of his works remain classics of both English-language literature and of Scottish literature. Famous titles include The Lady of the Lake (narrative poem) and the novels Waverley, Old Mortality (or The Tale of Old Mortality), Rob Roy, The Heart of Mid-Lothian, The Bride of Lammermoor, and Ivanhoe.

Although primarily remembered for his extensive literary works and his political engagement, Scott was an advocate, judge and legal administrator by profession, and throughout his career combined his writing and editing work with his daily occupation as Clerk of Session and Sheriff-Depute of Selkirkshire.

Scott's knowledge of history, and his facility with literary technique, made him a seminal figure in the establishment of the historical novel genre, as well as an exemplar of European literary Romanticism.